The ACC Liverpool Group welcomed 112,000 visitors to the Vitality Netball World Cup - the largest and most high-profile international women’s sporting event ever hosted in the city. 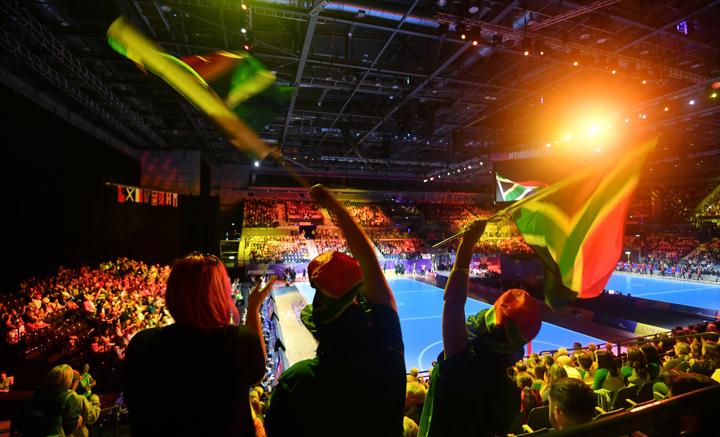 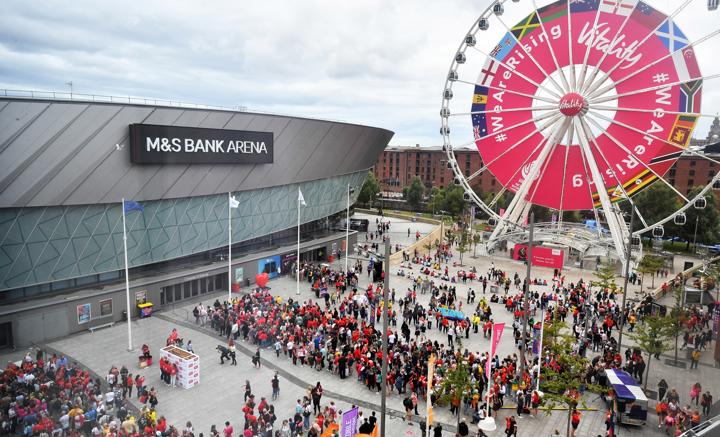 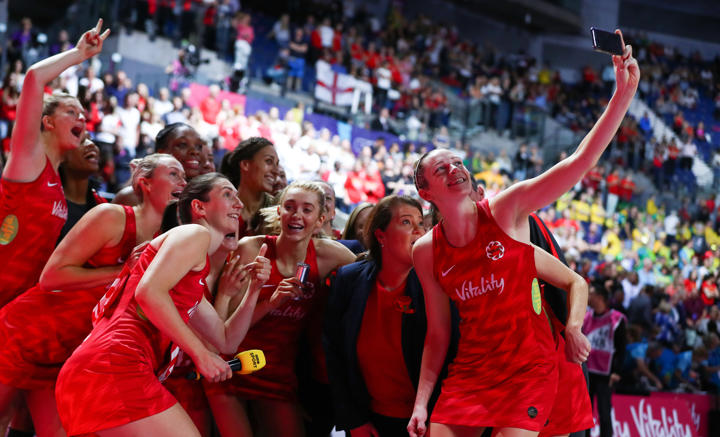 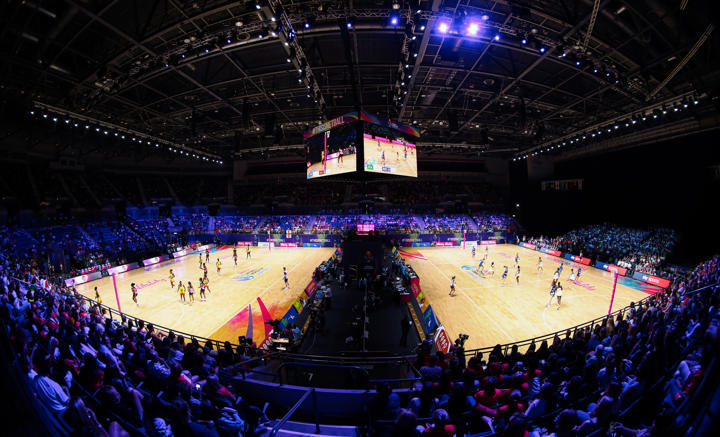 In 2009 England Netball, in partnership with Liverpool City Council, UK Sport and The ACC Liverpool Group, started work on a bid to host the Netball World Cup which was submitted to the International Netball Federation (INF) in 2014.  In 2015, the INF confirmed that the bid had been successful.

The sport had experienced growth throughout the world in the years prior to the tournament.   As the INF’s flagship event, its aim was to create a step change in knowledge transfer that would support the INF in its ambition to develop the game worldwide and to shine a spotlight on women’s sport.

Liverpool committed to a 10-year partnership with England Netball to build participation and grow the audience up to and beyond the Netball World Cup through a series of top internationals.  The arena has hosted a series of netball tournaments previously including the World Netball Series.

It was therefore a huge coup for the city, and the country, to win the Vitality Netball World Cup Liverpool and demonstrated Liverpool’s track record for hosting major global events.

The tournament was delivered by Netball World Cup Limited in partnership with England Netball, UK Sport, Liverpool City Council and The ACC Liverpool Group, on behalf of the INF.

The entire Liverpool event campus was utilised for the tournament – a total of 45,000 m2 event space.  All the action took place on specially constructed courts inside M&S Bank Arena Liverpool.  For this event, the arena had a maximum seating capacity of 8,000 and 3,400 m2 floor space.  The venue was transformed into two separate courts for the first part of the tournament then converted into one court for the later stages.

Space underneath the arena was transformed to include a press room, mixed zone and broadcast areas.  The arena concourse was used for merchandise as well as catering, provided by the venue’s catering service partner Centerplate.  The external piazza was transformed into a fan zone which contained everything from netball courts to merchandise units, from catering outlets to music and general experiential activities.

Exhibition Centre Liverpool was used for a plethora of different events, from training courts to the ‘Make the Game Liverpool’ event, hosted by England Netball.

ACC Liverpool was used in a number of ways including a warm-up hall, a staff rest area and wrap-around events organised by the International Netball Federation and its partners.  In addition, parts of the convention centre were transformed into three separate hospitality areas - the Eastbourne Lounge, Legends Suites and Liverpool 2019 Lounge – coordinated by the venue’s in-house catering team.  Guests were able to experience and enjoy premium food and drink before each match.

Meanwhile Pullman Liverpool was the headquarters hotel for the INF.

Elseewhere in the city, an official fan zone was created at Chavasse Park, Liverpool ONE, with more than 44,000 spectators flocking to watch the match action streamed live on a giant screen, take part in netball activities and enjoy music and entertainment – all programmed by Culture Liverpool.  Culture Liverpool also organised an opening ceremony featuring dance, music, projections and pyrotechnics, which wowed an audience of more than 6,000 at M&S Bank Arena Liverpool and an international TV audience of hundreds of thousands.

Events took place across the city including a candle lighting ceremony at St George’s Hall in the city centre.   Dating back to the first World Cup in 1963, the candle lighting ceremony is a poignant moment of reflection before the battle on the court begins.  Captains from every competing nation were invited to light a candle in recognition of friendship, goodwill and a commitment to honour the spirit of netball.

Other events included a welcome and closing party at Hinterlands in Cains Brewery Village and an INF delegate welcome event at the Museum of Liverpool.

A BBC Sport Relief celebrity netball match, hosted by presenter Clare Balding, took place during the tournament session on Friday 19 July.  Team captains Jennifer Saunders and Oti Mabuse, together with celebrities and netball legends, battled it out on the court in front of a packed arena.  Highlights of the match were then shown on BBC Two during the closing weekend in a special programme.

The tournament was the largest and most high-profile international women’s sporting event ever hosted in the city.  It was a huge operation but the flexibility of the campus meant that all spaces could be used in different ways from the training courts in the exhibition centre, to meetings in the convention centre, to the courts in the arena.  Fans gathered on the piazza in front of the campus every day for entertainment, merchandise and catering outlets.

From the event confirmation in 2015, four years of intense and detailed planning ensued.  Every team across The ACC Liverpool Group worked closely with the Netball World Cup team to deliver a successful event and covered every aspect from ticketing to marketing support, from operational delivery elements like security, cleaning, facilities, IT services, catering and production to event management.  The events and operations team were at the heart of the delivery of the event and the entire team was led by Michelle Cruise, event manager, and Tom Lechthaler, assistant director (events). On any day around 300 members of staff from The ACC Liverpool Group and its service partners worked exclusively on this event.

Ticket Quarter, the organisation’s ticketing agency, provided a full ticketing service for the tournament which included powering the ticketing of Netball World Cup’s official website, on-site box office, contact centre and marketing support.  Coordinating ticketing allocation was challenging due to the high volume of sales, the variety of fan packages and multiple priority on sales for pre-qualified fan groups.  Ticketing was a resounding success and sales smashed all targets with over 112,000 visitors across the 10 days.

The closing ceremony drew the tournament to an end and breakdown began straight away in time for the British Gymnastics Championship Series which took place at M&S Bank Arena in the same week.  Despite the tight operational turnaround, the venue was prepared and successfully hosted the gymnastics just days later.

The economic benefit of the event to the city was phenomenal with hotels, restaurants and attractions packed out for over 10 days.

Sky Sports and BBC Sport were broadcast partners and the tournament was transmitted to viewers across the world.

“We were thrilled with the success of the tournament and bowled over by the support it received across the world.  A huge thanks to the people of Liverpool for really getting behind the Vitality Netball World Cup - adding to the vibrant, festival atmosphere across the city - and for extending their renowned friendliness to all fans.”

“The entire city was a hive of activity and the bustling atmosphere was in abundance in and around the arena and across the region.  An event of this calibre takes many years to come to fruition and is only possible with the work that goes on behind the scenes.  For this particular event we worked closely with Liverpool City Council, UK Sport, England Netball and, once we won the bid, the INF so it was a huge achievement for multiple organisations and will help to pave the way for more major sporting events in the future.”

Jennifer Jensen, head of business tourism at Marketing Liverpool, said: “Liverpool shines brightest when it hosts huge events, and the Vitality Netball World Cup was the biggest in the city this year with ticket sales topping 112,000.  What was particularly pleasing for us was the geographical spread with more than 4,000 bought tickets from overseas. The biggest contingent was from Australia and the eventual champions New Zealand, but fans from more than 30 countries lit up the tournament.

“As well as overseas visitors, we had tens of thousands of people coming from outside the city. All these fans provided a huge economic boost to hotels, restaurants, attractions and the many other businesses connected to the visitor economy.

“The economic impact was of course immediate, but the long-term benefit was immense too. TV broadcast overwhelmingly positive images of Liverpool to viewers around the world, and thousands of people visiting the city for the first time left as its newest ambassadors, telling friends and family what a great place it is to visit. These factors aren’t just a nice bonus but are vital in giving people a positive impression of the city and attracting future visitors.”

The legacy of the tournament will help to pave the way for future major sporting events in the city such as the 2022 World Artistic Gymnastics Championships and the Rugby League World Cup 2021.  The organisers of Rugby League World Cup and Vitality Netball World Cup Liverpool 2019 signed a Memorandum of Understanding (MOU) ahead of the tournament - a world’s first for two sporting tournaments.  This unique agreement will see the two respective tournaments cooperate and share knowledge on a regular basis.

Councillor Wendy Simon, deputy mayor and cabinet member for culture, tourism and events, added: “Liverpool is a sporting city known worldwide for football, horseracing and boxing and following July’s incredible spectacle, we can now add netball to the list.

“For 10 days, netball fever was rife and the global spotlight shone on the city which raised the bar when it came to staging this show-stopping event.

“We were delighted with the success of the city council-run Fan Park. Whatever the weather, fans flocked to Chavasse Park to be part of the experience – whether it was to watch a match on the big screen, enjoy the amazing programme of live music and entertainment or just test out their own netball skills.

“It was the place to go to soak up the World Cup atmosphere and we’re proud to have been part of such an unforgettable event.”